KNRM important for Kitesurfing in the Netherlands

The KNRM plays an important role in safety for kite surfers. The KNRM is present at the many kite spots in the Netherlands to come out in an emergency to rescue us and to secure the material. We do not want to withhold the news that the KNRM is getting 8 new boats.

The Royal Dutch Lifeboat Company (KNRM) has commissioned the construction of eight new lifeboats. The boats will be built at two Dutch yards over the next five years. The construction involves an investment of 9.5 million euros and is funded from various legacies and contributions from KNRM donors.

The contract for the construction of the lifeboats has been awarded to two yards that have been building and maintaining lifeboats for the KNRM for many years. Yesterday afternoon Durk signed Douma van Dok and Scheepsbouw Woudsend B.V. and Orm de Waart of Habbeké Shipyard signed the contract with the KNRM in the person of director Jacob Tas. The first lifeboat will be delivered in 2021. The remaining seven lifeboats will follow in the following four years. 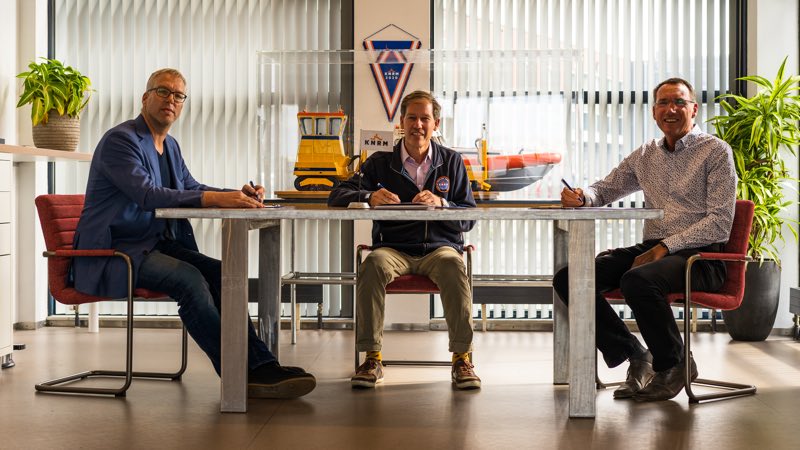 New lifeboats are of a proven model

The eight lifeboats to be built will be given the class name “Van Wijk”, named after the testator, who left money for the construction of the first boat of this series. In fact, the boat is a further development of the existing 11 meter long Valentine class. This so-called rigid-inflatable boat (RIB) was designed in 1990 and is praised by the rescuers who sail it for its seaworthiness.

The KNRM has a rescue fleet of 75 rescue boats, varying in length from 5 to 20 meters. With this rescue fleet, more than 4,000 seafarers and water sports enthusiasts are safely brought ashore every year.

The current lifeboats of the KNRM were built between 1991 and 2016. The oldest lifeboats are, almost 30 years old, due for replacement. The first new lifeboat in this series will have the function of reserve boat and will be deployed from 2022 on rescue stations where the lifeboat is under major maintenance. The home ports of the following seven boats will be announced in early 2021.

Traditionally, lifeboats are given a name by the KNRM that is linked to the donor or testator who paid for the boat. Through fundraising activities, the KNRM expects to find a proud name giver for all new lifeboats in the coming years, who will pay tribute to loved ones or to a special personal memory.

We need you! We can deliver your good content for just a few euros. Will you become a 35 Knots Supporter? Then you will get eternal fame anyway, but you are also eligible for Kitesurf gadgets. There is the possibility to be listed on the website. Inquire about the possibilities.

It is not cold when you are wearing a wetsuit! (and more …)

It is not cold when you are wearing a wetsuit (and more). Eric Taylor shows us what he puts on to keep it nice and warm during a kitesurfing session.

18 kite surfing tips for the Winter

Are you not afraid of winter? Do you continue to kite? Read tips on how to stay warm and what signs of hypothermia are here.

What are good earplugs for kite surfers? Prevent surfers ear by using the right earplugs for in the water. Protect your ears from cold and dirt.